How we got our baby back

As I mentioned in an earlier post Sisco had been taken
Through all this we were still hoping she had the ladies collar on as it had her number on the back
Since we put the posters up with the reward (£50 from the woman, £50 from us) we were hoping more people would keep an eye out
We had calls from quite a lot of people saying they were pretty sure they had seen Sisco
Some had even took her in until we got there
We visited about 6 houses, on the way there we got so excited and full of hope
Only to be met with another little black kitty
After a while we agreed that if we got called out again we'd go there thinking it probably wasn't her as the pain after realising it wasn't her was too much
After walking around so much we decided to stop for a few days, as it was too exhausting in every way
We'd feel strong and kept saying 'she'll be fine, we'll fine her'
Then feel full of panic, it was awful
Monday night we had a call from a man saying he was pretty sure he'd seen her
We rushed over and he said he'd been putting the bins out and saw a little black cat looking at him
She kept crying, I did the cry (Sisco has a very distinct little meep/cry) and straight away he said 'that's it'
He had cats and he knew the cats around the area and hadn't seen her before
Also, he said she had a bright yellow tag on her collar (Carrie had put a little glowing yellow fish on the collar)
So we really felt like it may be a lead with hope
We gave him a flyer and he said he'd call again and keep an eye out
We had a look around the apartment block, they looked really fancy and had a communal swimming pool
We thought, typical of Sisco to find somewhere posh!
The next night we had a call from Carrie saying that someone had Sisco and had called from the number on the collar
We both screamed and also felt like we might be sick!
We ran to Carries as she said she'd drive us there
It was the same area as last night, we found the number and knocked on the door
I couldn't look, so asked Paul to check
Then he said 'it's Sisco'
I turned and saw my baby looking at me
OH MY GOD!
Everything seemed a blur, I grabbed her and we hugged her
Straight away she began to purr and do her little meeps
They had given her some cheese to eat and she had some on her chin, she's such messy eater
She looked so cute
Apparently, a couples nanny had seen the poster, then Sisco wandering and bought her in
I think Paul and I were in total shock!
On the ride home we put her in a cat carrier and she put her paw out on our hand
I couldn't be angry with Carrie anymore as she'd done a lot to help and I could tell she felt really bad
Being angry would be a waste of time, and we had our baby back
She ate so much and seemed so tired, but she didn't look skinny
I wish she could tell us what had happened in those 2 weeks
Oh, we also gave the nanny the reward
The last few days have been wonderful
She has a new pink collar with a pink tag with her name and out number on it
And she has a radiator bed! She likes sitting on it on the bed, but not on the radiator
She seems so content
Sometimes we just sit there and watch her sleep
I can't tell you how happy we are a little family again
Also, the lady across the road that originally had her had given us the microchip papers so we can transfer the details to us
She's lived with us for 4 years anyway
So, that's what happened
Sure we've encountered horrible people, had nasty calls and our posters torn down
But the majority of people we've met have been lovely, helpful and really kind
What can I say, CAT LOVERS RULE!!
Thank you for all your kind emails, tweets and messages
It has meant so much!
Love Claire, Paul and Sisco 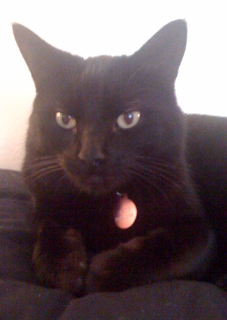