The story of Sisco

I've been waiting to post again until my baby is back in my arms
Unfortunately, that hasn't happened yet
I've had cats my whole life, I'm from a long line of crazy cat ladies
I've loved and lost many cats, but nothing has hit me as hard as this
When I first moved to London it was the first time that I wasn't in contact with cats
I feel very maternal towards cats and I during this period I felt like a part of my life was missing
I remember the first time I saw Sisco, walking outside my flat
She was petite and so so cute
We gave her a fuss and went in
A few days later I had a call off Paul saying she'd come in our open bedroom window
I rushed home and gave her lots of cuddles
She was friendly, but wary
She seemed really hungry, so for some reason we gave her the rest of an opened can or sweetcorn
Which she gobbled up
She continued to come in and would follow us down the road, running ahead and turning to look at us making her little meep sounds as she went
I fell in love
We thought she must be a stray as she had hair missing off her nose, probably from a fight
She was also very hungry
We bought cat food and began to feed her
Looking back, I don't know why we didn't take her to the vets to get scanned
But we really did think she was a stray
It was only when we were going on holiday to Florida that we decided to take her to the vet to get checked over and chipped
So that we could put her in a cattery whilst we were away
I was so proud of the way she was so brave and gave her so many cuddles
The vet loved her and went off scan her chip, which we didn't know she had
She came back and told me the owner wanted to speak to me
My heart sank
My baby, who has at least 3 meals a day from us for the last year and is in most of the day has an owner?
The woman lived across the road from us and told me she had lots of animals and to put her on the road and that she'll find her way back (By the way, her name was Ocean)
I told her everything and where we lived
It broke my heart
I cried for a few hours and vowed I'd never let her in again
A few hours passed and she turned up at our bedroom window crying I couldn't turn her away
Things carried on as usual
I saw the woman from across the road quite a lot and she never said anything, so I assumed everything was ok
Sisco is such a huge part of my life and the last few weeks have been heartbreaking
The last time we saw her was the morning of Tuesday the 27th
For a few days we worried, but we thought maybe she was trapped in a garage
We searched the local area, all the places she hangs out
Days went by and Paul and I couldn't focus on anything but her
We told the original owners across the road and they told us they never see her anymore
They were really friendly and knew that she had been with us
And we can have her as she's lived with us for the last few years
Then Monday morning I got a call from Helen, a lady that lives round the corner from me
I walk her dog and Sisco sometimes sits outside her home waiting for me
Helen told me to come round and she was with a lady that had took a cat from outside her home
We rushed round, thinking we'd be met with Siscos little cheeky face
Unfortunately that didn't happen
Apparently this woman called Carrie saw Sisco outside Helen's on the Tuesday 27th, grabbed her and took her home
Which was about 10 minutes walk from us, but across a big main road that has always spooked Sisco
Her black tomcat had been missing 3 months and she saw Sisco and took her home
She put a collar with her cats details on and fed her
The next day Sisco went off and surprisingly her cat returned
Then she realised she'd took someones cat
She'd come back to Helen's and that's when we found out
She was very apologetic and at the time I was just relieved as I knew Sisco wasn't a wanderer and she may be in the area
Since then 11 days has passed
We've put all our other responsibilities aside and been out walking and calling for at least 8 hours a day
We've called, emailed and put posters up with a reward
But no luck
I do know my baby though, and it wouldn't surprise me if she's found somewhere to get warm and fed
She's not the type of cat to 'rough it'
She's chipped and has that ladies collar on so we still have hope
Carrie has apologised, helped search a lot and we've since met her cat
He really does look like Sisco
I've never been through so many different emotions in my life, or cried so much
People may just see cats as a pet, but she is my baby
Our home seems so empty without her
Today is the 1st day we've had a break from searching
This has been physically, emotionally and mentally draining
But each day we talk about her funny little ways and try to keep positive
We've had a few false leads, which has been heartbreaking
But on the whole people have been so kind and helpful
We've also encountered some mean people, but we choose to just feel sad for them for being so angry 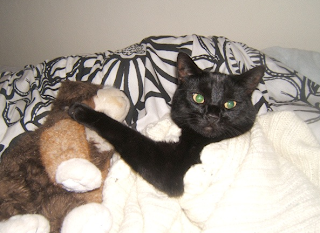